The OC Women’s March was held on Saturday Jan. 18, at the civic center in Santa Ana, Los Angeles, as well as at many other cities across the country reaching the east coast, writing its fourth year into existence. Hundreds of people gathered for its human rights cause and were addressed by politicians such as Katie Porter and other men and women of influence who have made a difference in the community.

The first Women’s March was organized by Women’s March Inc. after Trump’s inauguration on Jan 21, 2017 in Washington, D.C., which saw a turnout of around 470,000 people; however, millions others marched as well in numerous other regions. Washington Post estimated that the number of participants in 2017 globally ranged from 3,267,134 and 5,246,670.

Linda Sarsour, Tamika Mallory, Carmen Perez, and cofounder of the march Bob Bland were the co-chairs for Women’s March Inc. While Perez still remains on the national board, the other three stepped down in 2019, the board now consisting of more than a dozen women of varying backgrounds and identities. 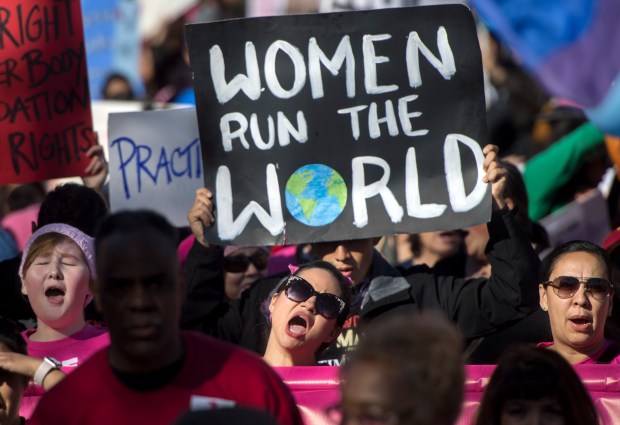 The initial ceremony in this year’s OC Women’s March consisted of several influential speakers who recounted the accomplishments that people have achieved to provide better opportunities and more rights for people of color and racial and social minorities. They voiced their opinions and encouraged people to speak out for what they believe in and to keep on fighting.

This year’s march celebrated the 100th anniversary of women’s suffrage, women having acquired the right to vote in 1920 after the passage of the 19th amendment. The march was heavily focused on getting people to vote in this year’s election and to show them that they could make a difference by submitting their ballots on Nov. 3. More than 15,000 people gathered on the streets of downtown Santa Ana. Both men and women marched and raised above their heads many creative, unique, and inspirational signs that were designed to stand out and promote more awareness. Some of which included, “Trump’s team is like atoms they make up everything,” “Boys will be boys held accountable for their actions,” “Make America think again,” “Girl you can change the world,” and countless more, all providing a meaningful message.

People walked around 3 miles in the hot day, braving the heat. It started at 9:45 A.M. and ended around 1 P.M. Overall, thousands of people from different communities joined together to advocate for human rights, providing a symbolic meaning for the peaceful event.